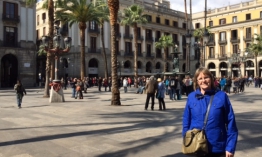 Report on Mediterranean Cruise in March 2015

I was happy to finally see the Canary Islands and to step on African soil! We had a port stop in Casablanca, but went straight to the train station and took the frequent (and cheap) first class train to Rabat for the day. There we took cabs to the Kasbah, where we visited the most ancient part of the city (reminiscent of Santorini, I thought) and the Medina, with all the souks selling their wares, including a stall with a huge variety of dates and “hole-in-the-wall” cafes, lined up along small side streets. We ate at one where meat and vegetables were cooked on coals in tajines, and were served with a big round bread roll.  It turned out to be delicious. The locals were eating with their hands, using the bread, but we tourists asked for forks, which they provided.

The Canary Islands we visited are amazingly diverse. Tenerife was beautiful. We took a train (public transport - kind of like an LRT) to the ancient capital of the Canaries, San Cristobal de La Laguna.  For the very reasonable price of €1.35, it took us up the mountain in about 30 or so minutes to the old town which is a UNESCO World Heritage Site, dating back to the time of Ferdinand and Isabella.  Apart from its UNESCO status, La Laguna is a renowned university town with more than 30,000 students, and is also considered the cultural center of the Canary Islands.

Lanzarote is rugged, stark and imposing with its geothermal and volcanic landscape.  We rented cars and drove to Parque Nacional de Timanfaya where we saw the lava remains which are Lanzarote's greatest attraction. It’s amazing to think that this area of was created only some 300 years ago as a result of the eruption of about 100 volcanoes.  Fire Mountains is certainly a very apt name.  We took advantage of a narrated bus tour, and then ate lunch at the Volcanic Grill - El Diablo restaurant which cooks meat and fish directly on the hot volcanic steam.  With ground temperatures between 400°C and 600°C just a few meters below the surface, lunch is ready quickly and with minimal energy cost.

We all loved the island of Madeira, Portugal where we visited its' capital, Funchal.! The city is nestled at the foot of a mountain facing out towards the Atlantic, and enjoys a warm sunny climate year round. We visited the beautiful gardens, the cathedral, and of course participated in some Madeira tasting (and purchasing!) at Blandy's, which has been in operation for 200 years.  It’s always our goal to try to sample at least a bit of the “real life” of any place we visit.  In Madeira we joined the locals at a café for some traditional Madeira soup.

Next on our tour was a day in Malaga, Spain, where we took advantage of an organized ship's tour to Granada and the Alhambra. This was a very well-run tour.  The Alhambra was, of course, magnificent, with all its fascinating history and beautiful gardens.

Our cruise itinerary included only the 5 ports of call, with the rest as “day at sea”. The ship organized plenty of activities, including trivia games and other games to keep us entertained and having fun.

The NCL Spirit, although one of NCL's oldest ships, is very well maintained and had very good service. The food was also generally very good, and I would say compares favourably with Princess or Celebrity!

Overall, a very good experience that created some great memories!